Catching up while laundry is drying here in Fredericton.  That’s the capital of New Brunswick for my American friends.

Let’s see, I believe it’s Thursday.  Tuesday we crossed the island, proving in the flesh several of Paula’s claims:

On our way across the island we stopped in Victoria by the Sea.

Then we stopped at Summerside, the island’s second town.  Even there a lot of things on PEI aren’t open for the season yet, which really starts this weekend.  Wow, kinda blows the mind of a Hoosier girl where it’s been 90F already and my summer break is about half over!

Ann and her friend Barb had been at a rug hooking class on the other side of the island, so we met them in New London at a pottery, where we knit in the garden while waiting.

It was on to Alberton for the night, where we ate at the dockside restaurant – evidence of island-ness!

We stayed at a B&B with nice gardens and the next morning had the “great car repacking” as we were about to go our separate ways.

First there was time for a visit to this guy’s crazy place.

My favorite was the fox in the hen house!  Real hen house, real hens. 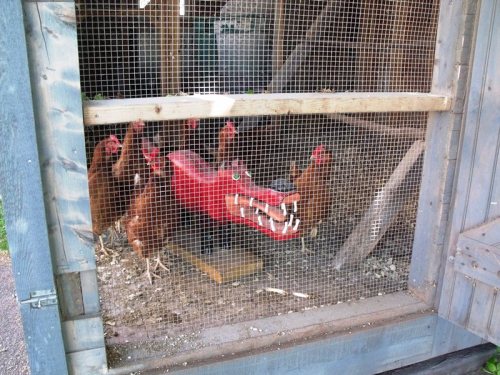 A stop at the MacAusland’s Woolen Mill and Ann’s car looked like this.  I was much more restrained; I bought a blanket. 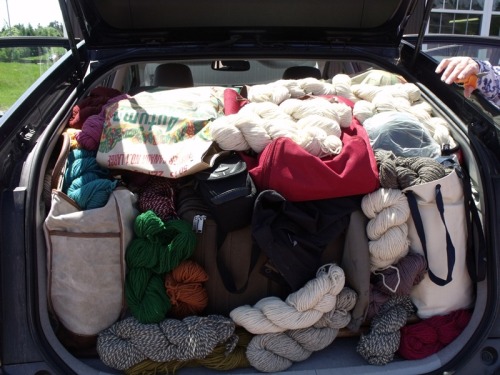 Lunch in O’Leary, then I was on to Fredericton.  Today it’s north to Quebec.  Je me souviens!