The tour of Canadian capitals continues as I left Quebec City and arrived in Ottawa yesterday afternoon.  The drive from Quebec to Montreal was flat, straight, and incredibly boring, but good for the gas mileage.

According to the map I went right through Montreal, but I couldn’t tell you much about it.  There was a long tunnel and then a bunch of traffic moving bumper to bumper, seemingly all in the same direction I wanted to go.  I actually had no problems navigating as the signage was clear and I’d been warned ahead of time to “stay in the middle lane and avoid the saints.”  (Apparently almost everything in Quebec, including roads and towns, is named after Catholic saints.  In the not-making-it-up department, my favorite was the exit sign for St. Louis du Ha! Ha!)

It’s a relatively short drive from Montreal to Ottawa.  I’m staying at the youth hostel located in the old jail. 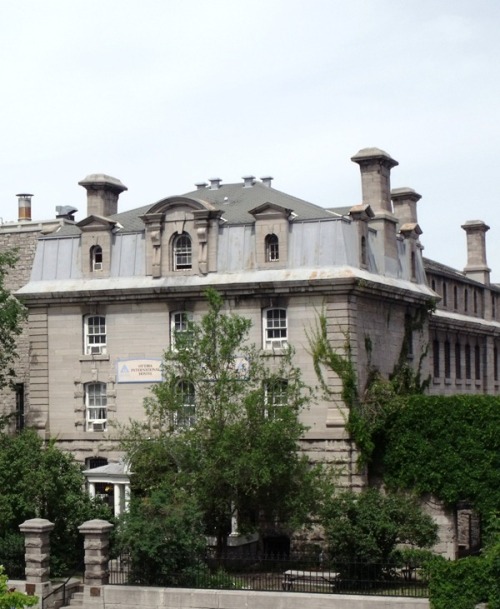 Two nights in cell 6.  The location is fantastic, right downtown, within walking distance of about everything.  The price is fantastic too.  I can’t believe it’s been a decade since I’ve stayed in a hostel, though (!) and the bands playing in the courtyard bar until 2:00 a.m. this morning were not so fantastic.  Apparently I’d stumbled into some sort of  loud noise festival. (Yes.  Officially old.)  Eventually I just fell asleep anyway.  Tylenol PM does wonders.

When I got here yesterday afternoon I just wandered around a while as I somehow couldn’t place myself on the map.  Yeah, me, the map queen!  Anyway, it turned out to be a great way to get familiar with the place.  I saw the ByWard Market, Parliament Hill, the Rideau Canal, a whole bunch of monuments and statues, and the Sparks Street pedestrian mall.

The picture above is of the locks on the Rideau Canal, looking over the Ottawa River to the Quebec side.  Note to self:  If it’s called Parliament Hill, there’s probably some climbing involved.  Be prepared next time.  Come here first or eat less in the Maritimes.

Today I was up  and off to Gatineau on the other side of the Ottawa River.  Although Gatineau is in Quebec and Ottawa is in Ontario, these are the most truly bilingual places I’ve been yet.  When someone opens their mouth you honestly don’t know whether it’s going to be French or English coming out, yet it seems everyone is perfectly able to communicate in both.  At least the ones I’ve dealt with; I know it really can’t be everyone.

On the way to the Alexandra Bridge you pass the National Gallery of Canada. The directions to the Gallery in the handout from the hostel say “Stop when you see the giant spider.”

Anyway, smack across the bridge is the Canadian Museum of Civilization.  It’s so close you barely have to put your toe into French territory, just turn left at the statue of Rocket Richard and you’re there. 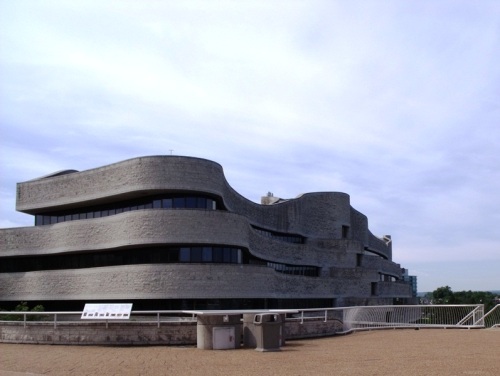 I remember wanting to see it all those years ago when I was studying history and museum work as an undergraduate.  Apparently these things take time, because here I am.  It’s a pretty impressive place.

I got to eat lunch on the patio overlooking the river and Parliament Hill while Ottawa showed off its summer glory. 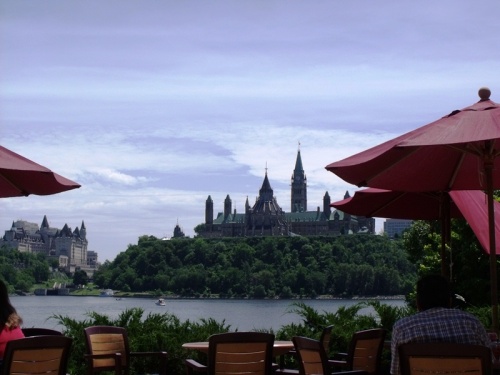 After, I rode the water taxi back and stopped at the Rideau Centre for some souvenirs.  I had a coffee in the jail yard and came up to write the blog.  What an incredible time; I’m so glad Paula convinced me to stop here.

Tomorrow I get to go to London.  Don’t get excited – it’s London, Ontario.  And then, could it be time to go home?